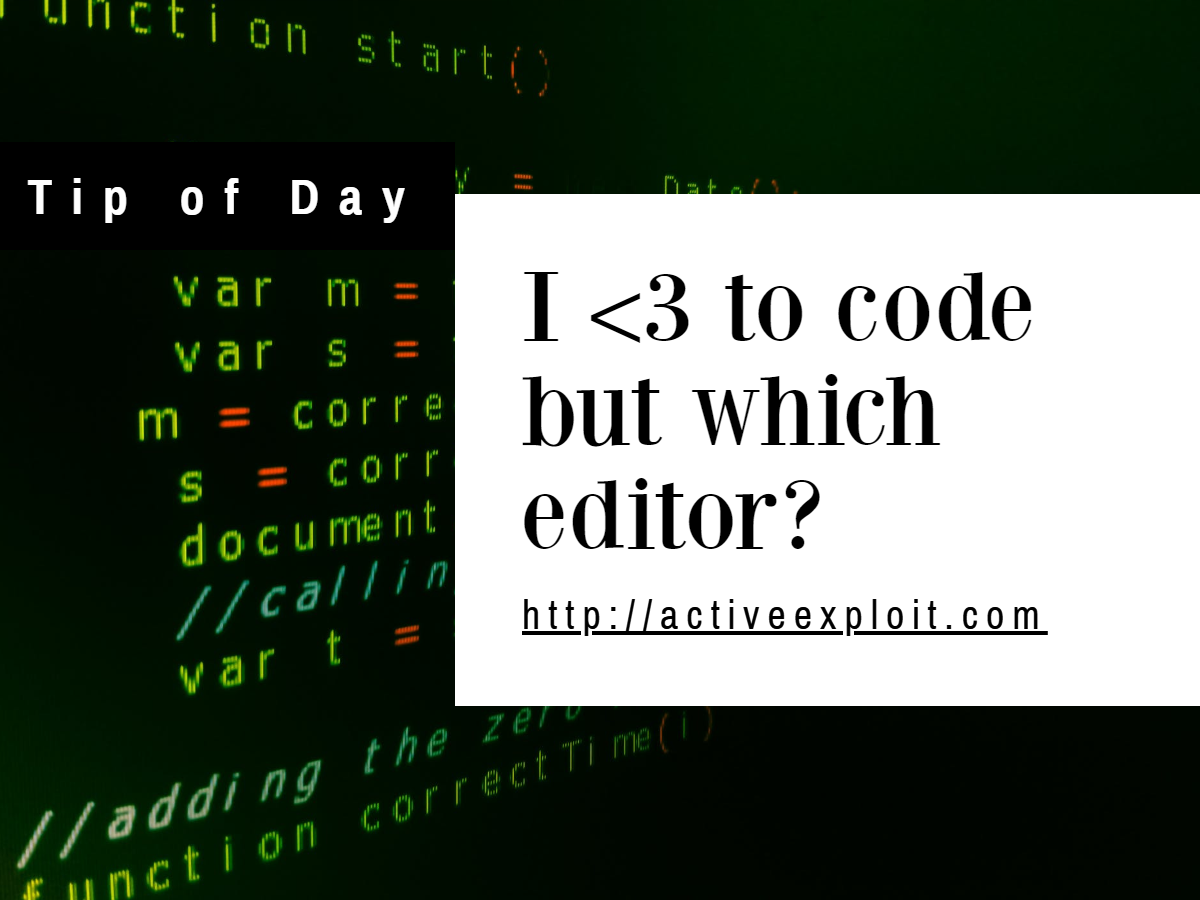 There are as many text editors as there are distributions of Linux. A text editor, also known as a code editor, is an application designed for coding and editing many other programming languages. Most editors come with syntax highlighting, easy navigation, customizable interfaces, search and replace options, and many other features. Today I will go over 5 of my favorite editors and which ones I recommend you use.

Atom is a popular open-source code/text editor that works across several platforms such as Windows, Mac, or Linux.

Pros: Atom has color-coded syntax, a smart autocomplete feature, multiple panes, and a search-and-replace feature. It also has its own package manager for plugins, so you can easily expand its functionality. You can also customize the appearance manually by using themes. A new plugin – called teletype – allows you to share workspaces with other Atom users.

Cons: Most users will have to tweak the default configuration. Low-spec computers will struggle to run Atom, especially if you load multiple projects.

Atom is not typically included in a default Linux installation. Install it with the following commands:

For RedHat or CentOS systems, use the yum install command instead of apt-get install.

Gedit is a text editor that comes with the GNOME desktop environment. The design emphasizes simplicity so gedit is a great editor for beginners. Even though simple in design, gedit is a powerful tool.

Cons: This editor works well if you do not need too many features, or if you simply prefer a clean interface. Gedit works great with GNOME, but there are better options for other desktop environments.

On older versions of Linux, or versions without GNOME, it may not come pre-installed. Install gedit with the following command:

Almost all Linux distributions, even older versions, come with the Vim editor installed. Vim stands for Vi Improved, meaning that Vim is a modified and improved version of the old Vi text editor.

Pros: Vim supports automatic commands, digraph inputs (useful in programming), split and session screens, tabs, colored schemes (color-coded by function), and tagging. It can be configured with plugins and comes with a tutorial (invoked with the vimtutor command). When you master the commands, Vim is very efficient.

Cons: It does not have a GUI. The only way you can initiate Vim is from the command line. The interface is user-unfriendly, while some commands are not intuitive. Coding a file from scratch would be too complicated. The learning curve can be steep, but Vim is very popular in the Linux community.

Nano is a revision of an older editor called Pico and comes pre-loaded on most Linux installations. Nano is an ideal lightweight editor for beginners. It’s a lot easier to use than Vim, so it’s worth learning Nano for quick configuration edits.

Pros: It supports GNU Autoconf, interactive search-and-replace, auto-indent, and spellcheck. Nano is intuitive and easy to use. It lists the keystroke commands at the bottom of the editor, so you don’t have to memorize or look them up.

Cons: The list of commands is short and some may be unintuitive.

If you’ve installed Anaconda on Linux, you may be familiar with the option to install Microsoft Visual Studio Code. Even though it’s from Microsoft, VSCode is cross-platform, meaning it works on Windows, Linux, and Mac.

Pros: Visual Studio Code is lightweight but powerful, and it offers an extensive library of add-ons. These include additional programming language support, debuggers, and commands. This text editor is an excellent choice for developing JavaScript applications and working in cross-platform environments.

Install VSCode with the following command:

Looking through a lot of these options you can tell there is not a right answer. Play with a few decide what works for you and who knows maybe you will find that a good old trusty VIM session is perfect for you. It is for me!

Thanks again. Keep playing, learning and Ask yourself can you hack it?